Every episode of the Cocaine & Rhinestones podcast has its own companion blog post with sources cited and all the extra goodies you come to this website to find.

This is a page for some books that were and will continue to be used as sources for nearly every single podcast episode. Putting them all here once keeps me from having to include them in every single other post.

These books do not leave my desk. At least three of them are straight-up intended as reference works. However, I find them all quite readable. Readable as in, starting at the beginning and working your way in, one page at a time. If you’re a fan of country music, these books are either already on your bookshelf or they’re missing from your bookshelf and your life.

(Since I do feel the need to say a little bit about the books on this page, rather than just list them with no commentary, it’s likely this page won’t be updated as often as it should be. As I write this, there are already several books that belong on this page and are not yet here. Bear with me.)

If you’d like to help me expand my library, feel free to purchase a book from this Amazon wishlist I’ve stocked with items I know I’ll need to keep making the podcast. Select “add to cart” for whatever you’d like to send in, simply check out as you normally would and Amazon will get it to me. Don’t worry about buying something I already have. When an item is purchased, Amazon automatically removes it from the list. 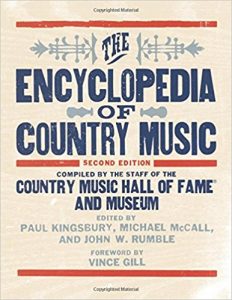 I have the First and Second Editions of The Encyclopedia of Country Music. If you must choose, go with the most recent one. It’s much bigger, so you get more entries. I’m really glad I have both editions, though. Entries have been “cleaned up” in the newer one with potentially disparaging insinuations removed. (If you’ve got access to both editions, check out the changes made to the entry for The Judds, as an example of what I mean.) The caustic tone of some First Edition entries obviously adds nothing for scholarly purposes but, when you’re making a podcast about the different “vibes” of different eras, that stuff is valuable. 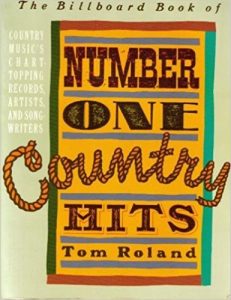 The Billboard Book of Number One Country Hits

It’s close to once a day that I reach for this book hoping to find some background on a #1 country single that hit before the year 1968, which is, sadly, the year this volume begins. If The Billboard Book of Number One Country Hits went all the way back to the first year of the Country chart in 1944, my work would be almost easy. As it stands, having a book like this for the story of every country chart-topper from the years 1968 to 1991 has been a huge helping hand. Entries alternate between information on the writer of a hit, performer of a hit or the specific event that inspired the hit. 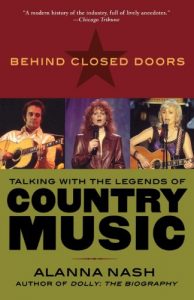 Behind Closed Doors: Talking with the Legends of Country Music

I don’t know anything about Alanna Nash except that she’s clearly obsessed with Elvis Presley, having written approximately 900 books about him, and that she may have the greatest talent I’ve ever come across for interviewing country artists. If there’s a rogue thought rattling around in the mind of her interview subject, begging not to be spoken aloud, Alanna will somehow find it and extricate it. Behind Closed Doors is over 500 pages long and if you aren’t interested in at least ten of the twenty-seven interviews then you do not like country music. And that’s okay. Stick around, though. I’ll get you. 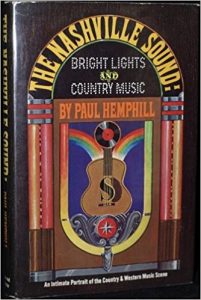 I wish Paul Hemphill was still alive because he could write his ass off but also because his book, The Nashville Sound, was a major influence on my decision to make a podcast about country music. See, I can not comprehend how anyone enjoyed this book before the Internet existed. This is as musical a book as has ever been written. Any page you flip to without at least one direct reference to a song title or performer’s entire career, as if you’re just as familiar with these things as Paul, that page is the exception. It’s as if Paul thought he was writing a book that 50 years later would be able to be enhanced with the soundtrack he built alongside this narrative… The format jumps back and forth between editorial commentary on the history/then-current state of the genre and “man on the street” interactions between Paul and the various fans/industry insiders he speaks with while researching the book. I don’t believe it’s possible to walk into a flea market in the middle 75% of this nation without seeing a copy of this. Buy it. Clear your schedule. Keep a YouTube-accessible device within reach and go deep into the world of country music. 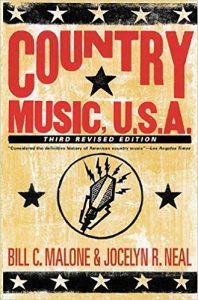 One of the most comprehensive histories of the genre ever written, Bill Malone’s book is also intimidating and, though still readable, not nearly so much as Hemphill’s book, above. If you need to know every little thing there is to know, Country Music USA may be the book for you but, speaking now as a high school dropout, reading this thing is like what I imagine it would be to go to college to learn instead of to party. Save this one until you’re in danger of making yourself look like an idiot by pretending to be some sort of definitive voice on country music or something. Or until you need to own a book you can use as a weapon. (It’s huge.)