In addition to the episode-specific sources given in each post and The Library references used for every episode of the podcast, below are the books used as main sources for Season 2. As with every “source” of information on the podcast, citing these books does not mean I vouch for the veracity of all the information contained in each one or that any single one of these books can or should be viewed as the final word on its subject. The fact is there are errors, lies or mistakes in most of these books and the best way to think of this is simply a collection of various perspectives on aspects of the larger story I’m telling.

SPOILER ALERT: if you’ve intentionally and successfully avoided all information regarding Season 2 and have not yet listened to the first, say, five episodes, then reading this page will reveal several things about the main topic which you may not want to know ahead of time. I won’t be getting into deep analysis or commentary on any of these works here, as broaching certain topics requires the full context I’ve created with the season, but just looking at this list of books will communicate a lot about what’s coming in Season 2. So, you’ve been warned.

Oh, and some of these books are out of print and it’s pretty likely the price of clean used copies will be driven up by my citing them as sources here. I can’t really do anything about that. 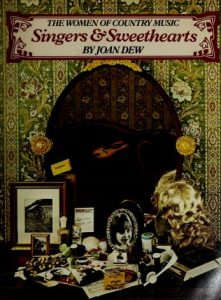 Singers and Sweethearts: The Women of Country Music

I’m listing this one first not because it’s the most important source for the season but because it’s the oldest book on the list (published in 1977) and that’s a good enough excuse to give everyone who may want to avoid spoilers a little padding on this page before getting to the more revealing stuff. Here, author Joan Dew spends about 150 pages profiling five legendary women of country music: Dolly Parton, Loretta Lynn, June Carter Cash, Tammy Wynette and Tanya Tucker. Those are all great stories and Joan does a great job telling them with the information available in 1977. (So, you know, basically writing or responding to the things said by her subjects, whether true or not.) 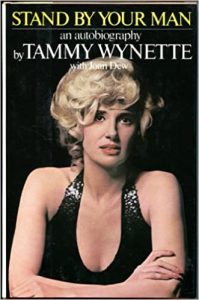 Stand by Your Man: An Autobiography

This whole page won’t be in chronological order but this is the next-oldest book, published in 1979, which means Joan Dew went from profiling Tammy for Singers & Sweethearts to immediately helping her write this autobiography. There are several likely reasons for that – Tammy’s eagerness to get her version of events in print and on the record, Joan’s interest in what had already become a massive shitshow of a story, etc. – but the most important thing to know about this very entertaining book is that it was widely panned by country music journalists at the time because of how many verifiably false claims and egregious allegations it contains. 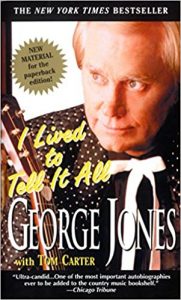 I Lived to Tell It All

Those looking for truth in George Jones’ book will have just as hard a time finding it as in Tammy’s book, though for slightly different reasons. The fact is it’s hardly accurate to even call this an autobiography. Most of this narrative feels like it was constructed from stories and memories other people shared with co-writer Tom Carter, who then brought that material to Jones for a reaction or a retelling of events in his own words. And, of course, the reason why George Jones’ autobiography could only be constructed in this manner is because of how much of his own memory was sacrificed to alcohol and cocaine. 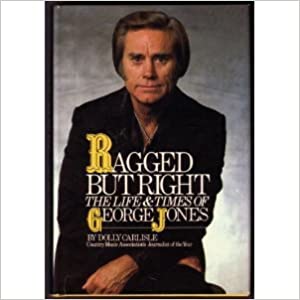 Ragged but Right: The Life and Times of George Jones

And the problem with trying to piece together George Jones’ life from previously-written histories is made clear at the very beginning of this biography, which opens on a ridiculously inaccurate depiction of events any serious modern researcher can track down on video to see what really happened. Dolly Carlisle does not seem to be intentionally lying at any point in her book. It’s more a matter of what resources were and weren’t available to her in 1984. This and the other George Jones biography which came out the same year were the first attempts at documenting his life and both are flawed. Dolly’s may print several untruths but her book is the more compassionate and grounded of the two, focused more on Jones’ relationship with his family, his struggle to find happiness and generally making more of an effort to understand his mind and/or how he came to be the way he was. 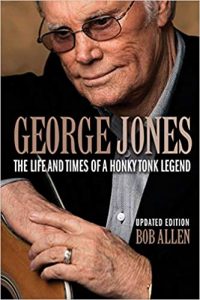 George Jones: The Life and Times of a Honky Tonk Legend

This is the other 1984 biography. Of the two, Bob Allen’s book is more data dense, which was very useful to me. However, his book is also more sensationalist, takes liberties with dramatizing scenes (though nowhere near as offensively as the Disgraceland podcast), seems to somewhat romanticize/lionize Jones’ toxic behavior (as many people do) and one gets the sense these pages are loaded with so many dates and dollar amounts in order to place as many objective facts as possible around the “juiciest” bits, which may or may not be as well-sourced. 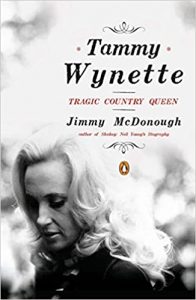 You’ll recognize Jimmy McDonough’s name as the author of Shakey, the Neil Young biography used as a source for the Kershaws episode in Season 1. Tragic Country Queen is the kind of book many Tammy Wynette fans will wish they’d never read because of how many uncomfortable yet incontrovertible truths it contains. That’s not to say it’s a perfect book or an infallible source but it is definitely the best book anyone is ever going to write about Tammy Wynette. 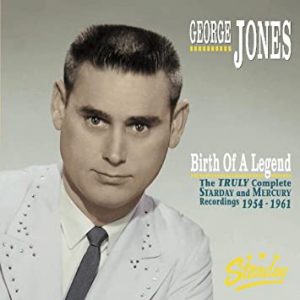 Birth of a Legend: The Complete Starday and Mercury Recordings

This was easily my favorite source used for Season 2. Reading all the biographies was mostly a matter of comparing various perspectives on roughly the same events, which becomes fairly tedious by the time you’re on the third one. When it comes to George Jones biographies, nearly all of them are lacking information on the details of his recording career because a) Jones was too drunk to remember and b) all the studio musicians who played on his albums did maybe a thousand sessions a year so they don’t remember either. The box sets by Bear Family remedy the situation. Each comes with a booklet containing whatever session information is available – the songs, who wrote them, who played on them, the date of recording, etc. – which may seem like a bunch of data only interesting to obsessives but you would (and, I hope, will) be amazed at the stories one can put together from plugging such data into the rest of all the historical fragments available. And the reason this box set stands out from the rest is Kevin Coffey was allowed to write a hardcover book, larger than the booklets of all the other George Jones box sets on Bear Family put together. 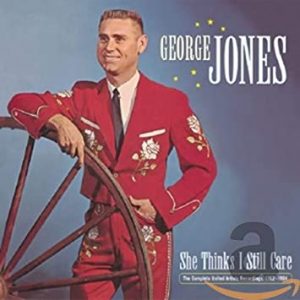 She Thinks I Still Care: The Complete United Artists Recordings 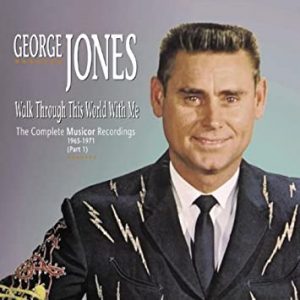 Walk Through This World with Me: The Complete Musicor Recordings, Part 1 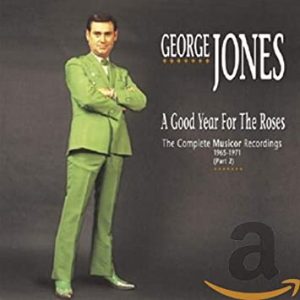 A Good Year for the Roses: The Complete Musicor Recordings, Part 2

These are the rest of the George Jones box sets on Bear Family. The booklets (by Rich Kienzle) contain much of the same variety of useful information as the Starday & Mercury box set above. 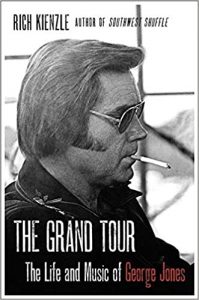 The Grand Tour: The Life and Music of George Jones

And this is the biography Rich Kienzle went ahead and wrote after doing half the required work for the box sets above. This bio very much seems to be written from the perspective of a fan who noted the lack of recording career information given in all the previous books, happened to have a wealth of such information from working on the Bear Family boxes and decided to try correcting the problem. What’s here feels a lot like an overcorrection, though, at least when judged as a standalone work. Fans who’ve read one or two of the other biographies may be happy to see Rich give passing overviews of the parts of the story everyone already knows in order to get to the sources he seems to’ve intentionally sought out primarily on the merits of their not having been quoted very much before. 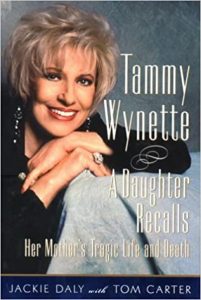 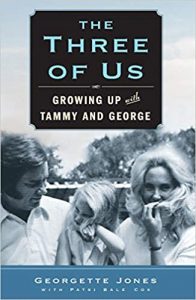 The Three of Us: Growing Up with Tammy and George

There are two unfortunate trends when it comes to using children of famous artists as sources on those artists. One is how rarely the kids have much of a relationship with the artist unless they choose to work as part of their organization because the artist was never home. The second unfortunate trend is that fans tend to regard artists’ children as the most reliable sources when they are, in fact, usually the people with the most to gain from reinforcing whatever version of the official story has been sold to fans. (Because of the first trend or because the child may not have even been born during the events they’re discussing, the official story sold to fans may even be the only version they know.)

Because of “The Great Divide,” these books from Tammy’s daughters are (unfortunately) examples of the first trend. However, Tammy was around enough for both daughters to get a sense of how much was wrong behind-the-scenes and, because they did not inherit a meaningful portion of the estate, they stood to gain nothing from reinforcing the official version of events and the purpose of these books was, therefore, to debunk it. Both daughters told the world about the abuse Tammy secretly suffered for years and drew attention to the infuriating circumstances of her death. Jackie is older than Georgette, so she has more first-hand details of the earlier years and her co-author is who worked with George Jones on his official autobiography, which lends a greater awareness of the Jones side of the story. Georgette being Tammy’s youngest means she lived at home later into the story than the other children, so she has more first-hand memory of what Tammy’s home life was like in the late 1970s and 1980s. Because she’s the only child of Tammy and George, I refer to Georgette more times throughout this season but both books were equally valuable. 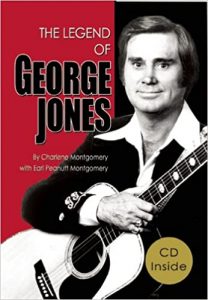 The Legend of George Jones

This is less a book about George Jones than it is an attempt by his estranged best friend’s wife to point out how they aren’t the bad guys even though George decided to stop being friends with them. It’s not that she’s wrong. The Montgomerys weren’t “the bad guys” but that doesn’t make this disjointed self-defense statement any more coherent, enjoyable or necessary to read. 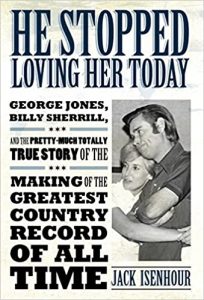 He Stopped Loving Her Today: George Jones, Billy Sherrill, and the Pretty-Much Totally True Story of the Making of the Greatest Country Record of All Time

This actually wasn’t used as a source for a single sentence of Season 2 but I must include it on this page as a warning because it is easily the worst book I read while researching Season 2 and one of the worst books I’ve read about country music in any capacity. Why Jack Isenhour chose to write this book or how it got published is a complete mystery to me, as he clearly knows almost nothing about the genre. (At one point, he confesses surprise at learning there is a death in the song “Green, Green Grass of Home,” which he found out from interviewing the songwriter in the process of writing this book.) The entire first half of the book is spent trying to unpack and correct ideas nearly no fans have about the genre and, even if they did, this guy would be unequipped to tackle them. This book is so bad I almost feel bad talking about it but the title is so incredibly misleading and the contents are irredeemable.